LOZ Architecture Tower Bridge is one of the best selling products in LOZ Architecture Diamond Blocks series in 2018. Let’s make some reviews about this item that made by a customer – a loyal fan of Lozshop.com!

Why is LOZ Architecture Tower Bridge so attractive with LOZ fans?

Some sights are known around the world and have become symbols of states. Egypt can not be imagined without the pyramids, France – without the Eiffel Tower. England is unthinkable without the Tower Bridge, which connected the banks of the Thames. We are going to build this amazing building today, literally brick by brick. 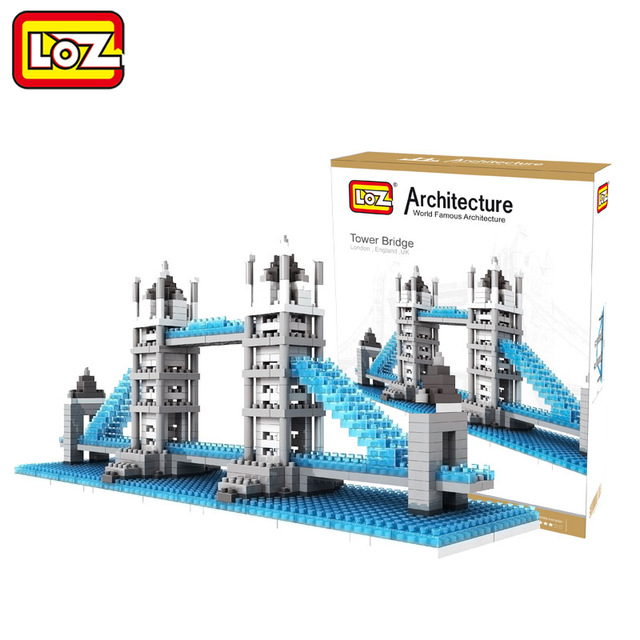 I talked in detail about the history of Tower Bridge in the section “ Architecture from smart paper ”. Let me remind you that the bridge was erected in 1894 by the project of the urban architect Horace Jones, helped by John Wolf-Berry. Construction lasted 8 years and required 11.000 tons of steel.

Our construction will begin with the foundation, which is composed of white rectangles, fastened with blue elements.

As you guessed, we have a part of the Thames in front of us, it is necessary to build a bridge over it. To do this, “vobёm” on the deep part of the pile and build on them the lower parts of the towers. The work is not difficult, the design is symmetrical, so the reciprocal part is assembled quite quickly, because there is a ready-made sample before our eyes.
We act in a similar way with the side arches on which the bridge spans rest. By the way, the appearance of the Tower Bridge is connected with the active development of the eastern part of London. There were complaints from the townspeople that it was inconvenient for them to cross to the opposite bank of the Thames along the London Bridge.
In 1870, a tunnel was submerged (Tower Subway) under the Thames, but it was also inconvenient for pedestrians to use it, and many residents were afraid of the “subway”. Then the city authorities decided to build a bridge near the Tower. 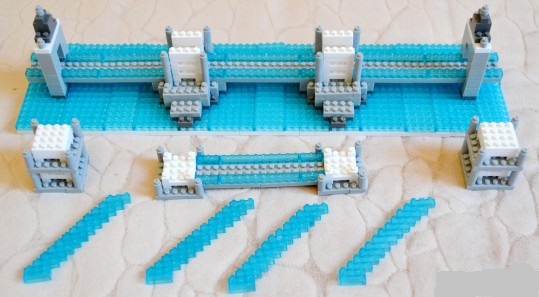 Almost the entire model of the bridge is ready, it remains to build the central towers and the pedestrian gallery, which is located at a height of 45 meters above the water. This superstructure was created specifically for pedestrians – during the bridge layout, it was possible either by a staircase or using an elevator to go up to the second floor and walk to the opposite tower through an open gallery.
It took about an hour, and the bridge is almost complete! We turn to the decoration.
Mechanisms powered steam engines located in the towers of the bridge, for their work required about 20 tons of coal. Water for heating was taken directly from the Thames. Only in 1974 were steam engines replaced with electric ones.

The bridge is ready! The creation of the model took about 70 minutes of leisurely “gathering” under instructive historical stories of the parents. The compact bridge took place on the shelf near the Dutch Mill.

The model of the bridge is absolutely symmetrical, so it is easy to assemble the structure (the third level of complexity out of five possible). Some difficulties may arise when connecting the suspension elements – dexterity and accuracy are necessary. Nevertheless, I think that an eight-year-old child will cope completely with the task set for him.
The most important thing in these designers is that they can be disassembled back into blocks, and then assembled from parts of any model. Unfortunately, I did not find the schemes in the public domain, so I will be grateful for any assistance in finding them.
Tags:
loz architecture diamond blocks, LOZ Architecture Tower Bridge Review, loz blocks, LOZ Blocks online store, loz diamond blocks
Facebook Twitter Google Email Pinterest
Newer List of 10 best-selling Balody Blocks products 2019
Back to list
Older LOZ BlockS Wholesale Policy 2019

Facebook Twitter Google Email Pinterest
LOZ Thomas and Friend is one of the most interesting product in LOZ Movie Series. Let's discover the amazing Thomas's Journey with us! ...

END_OF_DOCUMENT_TOKEN_TO_BE_REPLACED

Facebook Twitter Google Email Pinterest
LOZ Blocks wholesale is simple: find the products you want to resell, choose the quantity, and pay via PayPal or other local payments....

END_OF_DOCUMENT_TOKEN_TO_BE_REPLACED

Nanoblock and LOZ Blocks: what is better for brick-fans?

END_OF_DOCUMENT_TOKEN_TO_BE_REPLACED

Facebook Twitter Google Email Pinterest
In 2019, Loz diamond block is one of the most wanted series. We review again top 10 products of best selling in term of Diamond BlockS ...

END_OF_DOCUMENT_TOKEN_TO_BE_REPLACED

Facebook Twitter Google Email Pinterest
The competences kids gain from playing LOZ BlockS are imperative and extraordinary! On the off chance that you never truly thought of t...

END_OF_DOCUMENT_TOKEN_TO_BE_REPLACED

Facebook Twitter Google Email Pinterest
This is the best replica of a Pikachu I've seen this month, especially when compared to its counterparts. The eyes, ears, mouth, tail, ...